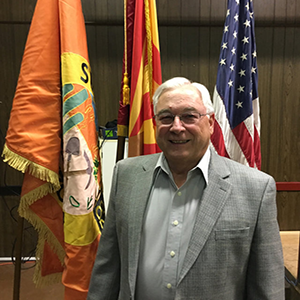 Bruce Armitage is a 2nd term Council Member for the Town of Superior and has also served a 2-year appointment as a Governing Board Member of the Superior Unified School District No. 15. Bruce retired from the Federal Aviation Administration (FAA) as the Manager of Falcon Field Air Traffic Control Tower in Mesa Arizona. He served as an Air Traffic Controller at Los Angeles and Seattle Air Traffic Control Centers and a Supervisor at Phoenix Approach Control.  After retiring from the FAA in 1998, he completed his career as a consultant for Williams Aviation Consulting Company located in Chandler Arizona.

Bruce was from a mining family (nickel and copper) and worked in the smelter for Magma Copper Company in Superior before beginning his career with the FAA.

With encouragement from his wife Tweedy, a member of the long-time Superior “McKee” family, Bruce moved back to the Superior in 2011.

People need police, sanitation, education, fire protection, housing, public transportation. Together we are going to make Urbanus the place over the rainbow, where every person will have his dream life.